A look back at 2016 – The Belleville Telescope

No one in the community of Belleville has stepped up to inquire about filling the vacant council seat created when Blaine Miller ascended to the position of Mayor following the resignation of mayor Tatum Couture. The previous opening garnered 4-5 inquiries.

A dispute between Crossroads Floral and the City of Belleville on the city’s attempt to claim the entire 1700 block of M by eminent domain has been scheduled for trial Aug. 25. The parties have been unable to reach an agreement. Belleville city crews removed broken glass windows from the old Republic Hotel at the corner of 17th and M Street and boarded up the openings. The city planned to rent six-foot tall fence that will close the alley to the public and extend around the building. All parking stalls will be lost. Commissioners inquired about the county’s liability insurance in the case that the Republic Hotel building starts to crumble.

Demolition began on the one-lane Pawnee Bridge across the Republican River south of Republic. The bridge will be replaced by a $1.6 million structure. One of the four power plant engines failed during a routine test. City officials said they have dealt with engine problems for several years, and have done two major re-builds. A handcuffed man who fled from a traffic stop in Belleville was later apprehended, and two alleged accomplices face charges.

Republic County Economic Development board said some businesses in the county want to expand, but they need to find a workforce. A lack of housing puts a damper on potential housing growth.

The Kansas Department of Agriculture hosts one of six statewide Agribusiness Development Workshops in Belleville. USD 109 – Republic County voted to spend about $100,000 to refinish the track. Adam Robertson was elected to Belleville City Council. The position was vacant for two months. Lanessa Aurand, Belleville, was named one of two first-time ever awardees for the Presidential Scholarship for the College of Business Administration at K-State. It is worth $80,000.

The Kansas-Bostwick Irrigation District based in Courtland will receive $2.5 million of a $5.5 million water settlement from Nebraska that will be used to continue efforts to conserve irrigation water. Blair Theater in Belleville had movie attendance in excess of 11,400 in 2015 – 3,000 more than the previous year.

A Republic County resident who wants to remain anonymous has claimed the $565,887 Super Kansas Cash jackpot from the Jan. 9 drawing. The winner, who said much of the money will go to charity, matched all numbers on a $5 Quick Pick. The winning ticket was sold at Main Street Liquor in Belleville. The Republic County High School girls’ basketball team won sub-state and are headed to state. 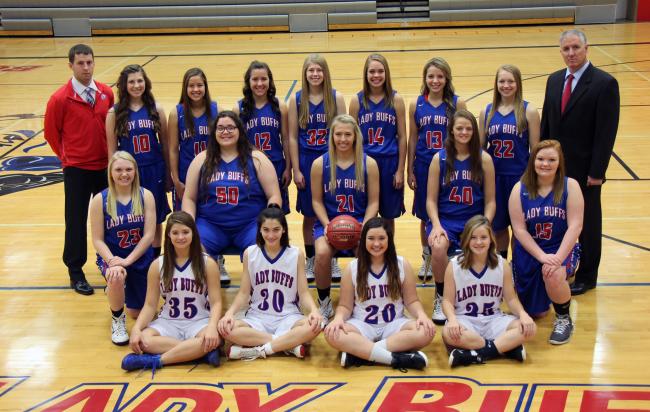 Highway administrator Dusty Zenger said his goal is to re-seal roads every four years. Lanessa Aurand was named Kansas Distinguished Young Woman and will represent the state in Mobile, Ala., in June. Belleville City Council members reached an agreement with Crossroads Floral owners to purchase the building for $28,000 plus $20,000 for moving expenses.

Luke Mahin, RCED Director, spoke about Republic County’s changing demographics at the Rural Opportunities Conference in Dodge City hosted by the Kansas Department of Commerce. Belleville Medical Clinic has hired a new nurse practioner after the retirement of Mickey Zenger. Briana Jensen will begin at the clinic in June. A $7.5 million road reconstruction project has begun on US 81 through Belleville. The “massive” project called for the closure of some streets while all concrete was completely replaced. The project was expected to be finished by Thanksgiving. Land prices are down as much as 15 percent since January. Depressed commodity prices are to blame.

The Munden area received the worst of the tornado damage when an EF 1 tornado hit on the evening of April 24. An area north of Belleville as well as farms between Munden and Narka also received damage.

Republic County employees will begin to pay a portion of full health insurance benefits in 2017. Republic County High School experienced a cyber attack that cost the district $250 in ransom and a lot of headache for staff. The Belleville City Council hears pleas to continue the city-supported travel center. The Duclos Foundation funds $33,500 in local projects. Melvin Jeardoe retired from Rolling Hills Electric Cooperative after 42 years. USD 109 heard a report from a consultant that proposed the district do construction and remodeling at the district’s two school buildings at a price tag of $11 million. Casey’s General Store has made plans to install a series of diesel pumps and filling station in the empty lot next to their Belleville store.

An estimated 900 bicyclists stopped in Belleville for the annual Bike Across Kansas event. Community businesses reported a significant uptick in business. Commissioners gave the NCK Free Fair committee $15,000 to repair facilities, including the grandstands. Cuba native Jim Krob was inducted into the track hall of fame at Fort Hays State University. The City of Belleville agreed to pay John Moe, of California, $48,000 for the historic bank building on the corner of 18th and M Streets. Floria-based wind energy company NextEra Energy Resources is visiting with landowners about the potential development of a wind farm. USD 109 board members approve architect renditions as they continue to work toward a bond issue. Wheat harvest shows good quality grain with yields averaging 70-bushels-an-acre.

Love’s Travel Stop and Subway opens on HWY 81 in Belleville.

Republic County is still several inches ahead of normal in precipitation this year despite going a month without rain. The area was listed as abnormally dry on the U.S. Drought Monitor. An informational meeting at Cuba about a proposed wind farm draws several hundred listeners. Republic County Hospital implements a new sleep study program. Fewer people voted in advance this year than in 2012.

A new carnival, Pride of Texas Shows, will highlight this year’s county fair. The Republic County Hospital will keep its Long Term Care unit for now; Belleville Health Care Center officials announced that they shave decided not to expand their facility.

Sara Vytlacil, of Belleville, was named the 2016 Kansas Czech Queen at a competition in Wilson.

Donors contribute to the purse for the 39thannual Belleville Midget Nationals, making it the largest for an outdoor midget race in 2016 Republican primary winners in the commissioners race are Marvin Bergstrom, of Courtland, and Melvin Jeardoe, of Concordia. The Belleville City council denies additional funding to the Blair Theater. Three-time Belleville Midget Nationals winner and one of the nation’s top race drivers Bryan Clauson died in a Lincoln, Neb., hospital a day after crashing during a race at the Belleville High Banks.

Torrential downpours were recorded in Eastern Republic County with some residents receiving as much as eight inches of rain. Some creeks overflowed. Earthquake tremors from a 5.6 magnitude earthquake near Pawnee, Okla., rattled North Central Kansas. The earthquake hit about 7:02 a.m. on Sept. 3. Wheat and sunflower acres are down this year as prices slip. The area is nine inches above normal for moisture for the year, which delayed some harvest. US81 renovations, which were supposed to be completed by November, won’t finish this year. The project will shut down Nov. 19 and resume March 13. Belleville’s Travel Information Center will close permanently. The decision came after a 3-3 tie vote that was broken by mayor Blaine Miller.

Eleven more students were enrolled at USD 109 this fall than at the close of school in May. The district is up 44 students in the past three years.

Cuba Cash Store was purchased by Cheri Cardi, of Cuba. Laverna Huncovsky and her late husband, Dale, owned the store for 30 years. The Lady Buffs volleyball team went to state for the first time as Republic County.

More than 80 people voted in Republic. The mobile polling site allowed those in the community to vote in town for the first time since about 2006.

Republic County Commissioners approved a conditional use agreement that could give wind farm development company NextEra Energy a lifetime tax exemption in exchange for an annual payment and other benefits to road development and maintenance.

Belleville City Council reversed its previous decision to permanently close the Travel Information Center at the end of the year. The TIC will operate until March when the state closes the 12th Street exit for road improvements. The TIC’s future will be evaluated at that time.